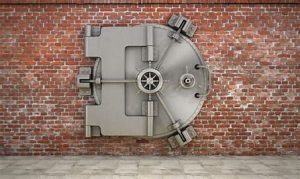 When centers break off from their surroundings, a distinct boundary forms at the center’s outer surface. Highly analogous in form and function to the wall cloud ringing the eye of a hurricane, such walls can be seen ringing castles, bank vaults, homes, and cell nuclei.

The walls at the surfaces of centers give rise to high rates of change across their boundaries. This is the case in physical objects, such as suns and hurricanes, where very high rates of change in physical properties (such as temperatures and pressures) can be measured across the object’s surface and is a natural result of the exceptional energy accumulated at centers relative to their surroundings.

By necessity such walls lead to the need to expend exceptional energy to pass and breach them –as bank robbers and invading armies well know.

This required sudden lurch in activity can be experienced all around us –it’s the quickening sound you experience when a spinning top, coin, or bottle slows. Its how a passing car or train sounds as it whooshes past us. Its how a wave suddenly leaps up before it crashes back down, and it’s the cheetah’s maximum stretch to seize its prey. It’s the final sprint when runners approach the finish line, and it’s the final push before a deadline at work.