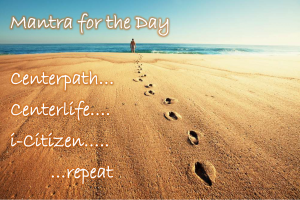 Check out this Free Introduction to Centerpath (the file is in .pdf format).

You can also view the Free Introduction via a UTube video at this link.

Below are a couple excerpts from the Free Intro to wet your whistle.

One day ﬁfteen years ago the world suddenly appeared very differently to me when, during a routine walk near my home, a series of events somehow conspired to overthrow an old worldview and replace it with something new. A revelation that seemingly unrelated phenomena -both natural, biological, and social; actually share a common underlying pattern —and apparent purpose.